The Mayor Of Stewart Avenue

Each year, the title of “Mayor of Stewart Avenue” was given to a successful area businessman who exhibited likeability and, more importantly, a willingness to share that year’s bounty by hosting a number of alcohol-fueled bashes designed to distract everyone from the undeniable economic decline plaguing the area.  In preceding decades, I’m sure the honor was reserved only for those of the highest moral rank, those captains of Southwest Atlanta industry whose wholesome character guaranteed success, well-behaved children, and a Norman Rockwell home life. For sure, mid 20th century enterprise was prosperous though by the 70s, businesses offering things like boat motors and fishing accessories were not a priority for Stewart Avenue residents. The economy had leveled off into auto pilot which, for a while, was fine but the fiscal dip started cutting into the bottom line. Many stores moved or closed while sleazy car dealers, Liquor Stores (a hit in any economy), No-Tell Motels, and privately owned markets (such as Brothers Three) remained. By the end of the decade there weren’t many candidates for the mayor title though it was a decent excuse to have a party.

The last “Mayor of Stewart Avenue” I recall with any clarity was a guy named Ken K. (his relatives might still be around so I’ll take the anonymous approach) who seemed to be doing quite well financially. He was fond of a drink which he might enjoy spontaneously throughout the day as can only the person with enough money and authority to avoid a rigid work schedule. This didn’t mean that he didn’t work just that he did so when it suited him. Like many in the area, he carried a gun and, when drunk, might discharge it more so to punctuate whatever was going on rather than out of self defense.

I know he certainly did it one night in Bros 3. He stumbled in the front door as he raised a 22 and popped of some shots with the bullets going into the ceiling. We were on him quickly from behind and wrestled the gun from his hand after which he staggered outside to his Cadillac where he wrangled the door open and fell into the front seat with his legs hanging out. Someone later pushed his legs in and shut the door, not out of the customary concern for a brother human, but just to get his ass out of the way. (Whoever did it probably rifled his wallet). When I returned the next morning, he was sitting in the store dealing with a hangover. He had no memory of the firearms display or, more likely, just didn’t want to cop to it since that would involve the assumption of responsibility. Besides, he already had a drink in his shaky hand to take off the edge. 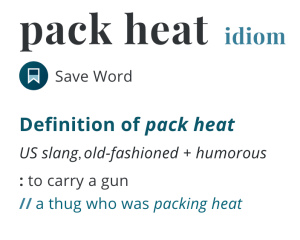 People used to say this albeit unironically

Carrying a gun was not as odd as you might think given the time and place. This was long before credit card use (or possession) was ubiquitous, when gambling debts were always settled with cash (most still are) thus, being rolled was a distinct possibility. Additionally, being known around the Avenue as someone not afraid to bust a few caps could discourage a would-be robber. It could also work against you in that a thief might conclude that it’s easier to first shoot and then take the money. There were instances of that also. A cocky repo guy named Rick, known to “pack heat”, as we used to say, overplayed his hand one night and was himself gunned down by someone who feared being shot first. It flipped me out because just two days before he had helped me execute a candy bar stealing rat who had taken up residence at Brothers Three. I had found the sugar eating rodent behind some Styrofoam coolers. The rat hissed and Rick, who was standing nearby, handed me a 5-iron from a pawned bag of clubs while urging me to “fuck that rat up, boy !“. I took aim at the rodent, who had moved onto his haunches, and swung the club in a perfect arc, culminating in solid contact with his neck which snapped him into the next dimension. 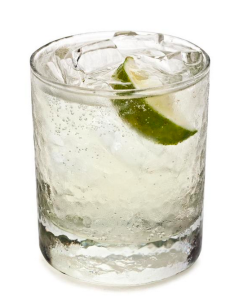 A Gin and Tonic – I made tons of these at Brother’s Three mostly for other people.

Anyway, back to Ken K. His general manner of speech inferred intoxication.  He slurred his words, grunted, and didn’t walk straight even when totally sober. Many in the area would drink daily and one of my regular duties was to mix drinks at 4:45 sharp for Roughhouse and whomever might be joining him. My orders were direct – make the drinks simple and strong – usually Tanqueray and Tonic or Vodka and OJ. This was the backdrop against which I learned to function. These guys worked pretty hard at the so called “straight job” in addition to whatever side “action” they had (usually gambling). It was hard enough for me to get to work after school and back home in time to finish homework but the Avenue education I received opened my eyes to intriguing possibilities – legal, illegal, and in between. Many of these men would keep drinking well into the evening and sometimes even into the next morning – yet would take exception to the idea of having a drink before the appointed “cock tail hour”.  Others had no such compunction. Most people, especially business owners, need to be sober at least for some portion of the day though if your supplier or partner is like you then it’s just as easy to do deals over lunch time (and sometimes breakfast) drinks. You can do this if you are the boss.

The mayoral election ceremony event was just a formality as that year’s recipient was usually selected well in advance during various drinking sessions held throughout the year. In previous decades, I bet there was a rigid protocol in place for nominations and voting, followed by a family-friendly award ceremony where high quality, catered food was the main event. The general banter would revolve around christian ethics and economic betterment with large checks being written to charities. Many of these businesses were good for sponsorship of Little League teams over at Perkerson Park which at the time was a really big thing  (a topic I discuss here). This was the era of Civic clubs such as the Lions, Civitan, Shriners, Elk, and Moose Lodge whose membership included Stewart Avenue business owners. They surely liked to drink but held up the veneer of social respectability at least until much later in the evening when clumsy sexual propositions would be made to waitresses and even the wives (and sometimes daughters) of fraternal brothers. Such activity, emanating from amateurs and the inexperienced, is never effective.

The 70s version of the Mayor’s ceremony, however, would dispense with any social pretense and might well involve women of the night (as a stated intent) and numerous bottles of liquor being hastily consumed straight out of the case. (Wives and daughters would most definitely NOT be in attendance). Dice games would breakout and public nudity would occur. In terms of the setting, it could be a bar but might just as easily wind up in a place like Kaiser’s Trim Shop where the work area would be converted to a party space – although no one bothered to move customer cars out of the way – the backseats of which might be used for a quickie. I know all of this to be true because it would be my job to run the liquor down to the shop in preparation for the event.

None of the Mayors I encountered would have been invited to articulate their personal ethics and entrepreneurial philosophies at a Church or to a classroom of business students. However, it would be too easy to dismiss them as layabouts or hedonists (well uniquely so) because many did in fact build businesses from scratch and managed to purchase homes, cars, and finance college education for their children.  Even In the face of economic decline, these types were agile and pivoted into other lines of work. They might also tap gambling winnings to pay college tuition or at least a child support payment. Anything to keep the hustle going.

Another thing I noticed about these men was their general lack of self-pity, not that they didn’t complain now and then, but it was usually just a happy hour comment, “the goddamn bank wants to foreclose on the shop”, that would soon be forgotten in the interest of finding a way around the problem even if it meant just accepting it. So, no – they wouldn’t be writing the next “Habits of Successful Business Dudes” but they could probably give a mean Ted Talk on innovative thinking in times of crisis. The title might be, “A  Business Guide For The Functional Alcoholic – How To Have A Good Time, All The Time”. Had any of these Mayors been around during the crash of 29, (some were, though as children), they certainly wouldn’t have jumped out the window. Nor would they have missed using acute national economic ruin as an excuse to have a drink. À votre santé

This site uses Akismet to reduce spam. Learn how your comment data is processed.